The definition of self- care is “the practice of taking action to preserve or improve one’s own health” (Oxford languages).  We’ve probably all heard this term enough over 2020.  As an Instructor of Sociology, my Sociological Imagination influences everything I see, read, and hear.  It is hard to shut off once you have it.  So, when I think of self-care, Sociology and the Sociological Imagination come right to my mind.  I recognize I’m probably the only person on earth who thinks this way, but stay with me.

So, let’s start with the Sociological Imagination.  The concept was developed and written about by Sociologist C. Wright Mills in his book of the same title in 1959.  Mills is probably one of my most favorite Sociologists.  Mills took more of a conflict approach (focusing on inequality) at a time when society and the discipline of Sociology leaned more towards the structural-functionalist approach.  His work didn’t even really become popular within the discipline until after he died in 1962.  Think of the turbulent and changing times of the 1960s, Mills’ ideas would have fit right in, but he was writing about his ideas like “The Sociological Imagination” and “The Power Elite” in the “Leave it to Beaver” 1950s.  One of the most famous pictures of Mills is him on his motorcycle, which I think gives a picture of his rebel image. 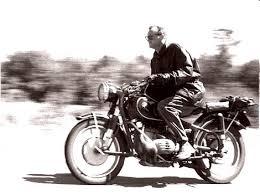 Most Americans are brought up with the good old, “pull yourself up by your bootstraps” kind of ethos.  What we refer to as individualism.  The idea that you don’t rely on anyone else, you work hard, and success will be yours.  You own your destiny.  How you end up is entirely up to you.  These ideas are seductive and empowering, no doubt.  The idea that you have complete control over your life makes one feel extremely powerful.  Over time, the opposite of this idea has become largely accepted.  Those who aren’t successful just aren’t working hard enough and therefore lazy.  The individualist thinking can encourage within us what is known as binary thinking.

“Binary thinking, also known as dichotomous thinking, happens when even complex concepts, ideas, and problems are overly simplified into being one side or another. The gray area in the middle is ignored or goes unnoticed.  Binary thinking helps us feel a sense of certainty. In a complex world, binary thinking can feel comforting. The uncertainty of complexity can be scary and anxiety-provoking, so it’s no wonder people fall into binary thinking, especially during uncertain times like we’re currently experiencing.” (How to Avoid Binary Thinking and Think More Clearly (lifehack.org))

Essentially binary thinking is similar to seeing everything as either good or bad, right or wrong.  Once put this way, I’m sure you can see the problem.  Not everything or everyone is good or bad, right or wrong.  Humans and life are complex.  I’m sure every one of us has done something we are not proud of or said something we regret.  Now, I understand it’s not as easy and fun to look at life in a complex way.  It can make your brain hurt.  But, oftentimes, doing the right thing never feels really good, that’s why so few people do.

Ok, now back to the Sociological Imagination, self-care, and radical empathy.  When I’m teaching, I start out with the traditional definition and historical information about the Sociological Imagination and C. Wright Mills.   Then I break it down by explaining to my students that the Sociological Imagination is really just a form of radical empathy.  “Radical Empathy is actively striving to better understand and share the feelings of others. To fundamentally change our perspectives from judgmental to accepting, in an attempt to more authentically connect with ourselves and others.” (What is Radical Empathy? — Camp Stomping Ground)  I also use a quote from Thich Nhat Hanh, a world renowned Buddhist teacher, “When you plant lettuce, if it does not grow well, you don’t blame the lettuce.  It may need fertilizer, or more water, or less sun.  You never blame the lettuce.  Yet, if we have problems with our friends or family, we blame the other person.  But if we know how to take care of them, they will grow well, like the lettuce.  Blaming has no positive effect at all, nor does trying to persuade using reason and argument.  That is my experience.  No blame, no reasoning, no argument, just understanding.  If you understand, and you show that you understand, you can love, and the situation will change.”  When I show this to students, I say, “so we have more empathy for plants than we often do for our fellow human beings.”  Light bulbs start to go on. 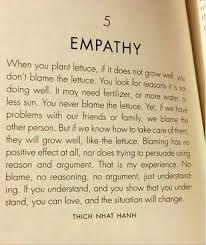 Here is where self-empowerment and self-care come into play.  As I stated earlier, it’s often empowering to have a mindset where you think you are in total control and your life is totally up to you.  Most humans, though, will experience the opposite of this at some point in their life.  You will do everything right, follow the rules, and still, something won’t work out for you.  It happens to all of us.  People don’t like to hear this.  So, how can developing a Sociological Imagination be empowering?  Once we give grace and understanding to others, then we can truly experience it for ourselves.  Maybe you’ve noticed before that people who tend to be critical of others are probably the most critical of themselves.  Once we truly begin to see and love others for who they are, then we can begin to do the same for ourselves.

I will give you an example from my own life.  In the Fall of 2020, I taught entirely online for the first time in my teaching career.  Five classes online, with my 4-year-old at home, and my 10-year-old remote learning.  Reflecting back on the semester, I can definitely say it was challenging and it probably wasn’t my best teaching work.  I got through it is what I can say.  It got done and sometimes that’s enough.  I would have faculty meetings throughout the semester and when I would attend these, I would often feel terrible about the job I was doing.  In these faculty meetings, other faculty would share what they were doing for their students and how they were engaging their students online.  I would sit through the meetings feeling shame and guilt because I wasn’t doing those things.  I would take the rest of that day and feel bad about the job I was doing.  Then, my Sociological Imagination would kick in.  I felt bad, that I knew.  But I needed context for how I was feeling.  For example, I was probably most certainly the youngest faculty member in those meetings.  Most of the other faculty were older than myself, I would assume.  Some would talk about their college age children.  Then, I would remind myself that none of them were in my shoes:  a 35-year-old, single mother, with 2 children at home, attempting to work and teach from home myself, with minimal childcare.  It can be simultaneously true that that semester of teaching was not my best work and that I was doing my best with the resources I had.  At the same time, last semester was an incredible learning experience.  It was challenging building my online classes from the ground up.  I’m going into this semester with that experience, so I can do and be better.

If I didn’t have my Sociological Imagination and had used Individualistic thinking, I would have blamed myself for not trying hard enough, not doing enough, and would have concluded that I am a terrible Instructor.  That’s incredibly de-motivating.  So, as you see, thinking with your Sociological Imagination can actually be self-care because the more understanding we give to others, the more we have for ourselves, so we may be our best selves.

Now, let me quickly address the haters.  There’s always some who think that this whole perspective is a cop-out, that it’s being a victim, etc., etc.  For those whose individualistic thinking is so engrained, having a Sociological Imagination often feels like a white flag of defeat.  The reason why, though, is because they are still relying on binary thinking.  For them, there’s winners and losers and if you’re not winning at life, you’re an automatic loser.  To those, I would say, if you don’t challenge yourself to see things in a more holistic and complex way, life has a way of working that out for you.

At its heart, that is what the Sociological Imagination is.  It calls on us to understand individuals not just based upon themselves, but based upon what is happening around them, essentially we treat them like lettuce, we begin to understand them more and judge them less.  In so doing, we extend a similar understanding to ourselves.

Alyssa Anderson is a 2003 graduate of Cuba High School.  She attended Spoon River College in Canton, IL and graduated with her Associates in Art and Science in May 2005.  She finished her Bachelor of Arts degree in Sociology at Western Illinois University in May of 2007. Being a resident of a small rural town, her Sociology classes helped her to understand the changes she had witnessed in her own home town.  She stayed on at Western Illinois University for her graduate studies and received her Master of Arts degree in Sociology in May of 2009. She has taught Sociology classes since her graduation at Spoon River College, Carl Sandburg College, and Western Illinois University where she is currently employed as an Instructor of Sociology.  Alyssa continues to live in Cuba with her two daughters, Jayna, 10 and Reese, 4.