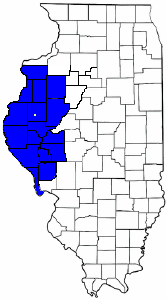 INTERESTING FACTS: Named for John Hancock, signer of the Declaration of Independence. Originally set aside as land for military veterans of War of 1812 but not settled until after the Blackhawk Indian War in 1832. Home to Nauvoo which was one of the biggest cities in the 1840s and headquarters of the Mormon Church. Home to Carthage where Mormon founder Joseph Smith was killed. Many Mormons visit as part of a pilgrimage today.

*Photos of a replicated USS Pontoosuc